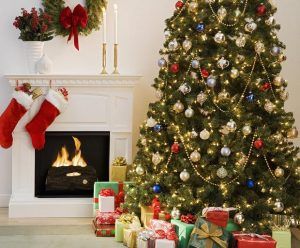 Since it ‘tis the season to revel in feasting and magical thinking (cookies for Santa and dreams of stress-free family gatherings), let’s take a look at the folklore and facts surrounding a few ingredients that go into our holiday meals.

Sage: an ancient cure-all? The beautiful, fragrant herb we use in dressings has been revered in spiritual practice and touted as a cure for all manner of ailments since ancient times. Some Native American tribes use sage to this day for spiritual purification and healing, and ancient Romans used the “holy herb” in religious rituals. John Gerard, a 16th-century botanist in England, published the 1,484-page illustrated Herball, in which he stated that sage “is singularly good for the head and brain, it quickeneth the senses and memory…” There has been very little conclusive research about sage’s medicinal uses, but it’s still a beloved culinary herb.

Tomato: the “poison apple.” Native to western South America and thought to be domesticated by the Aztecs, tomatoes got a bad rap that stuck for centuries after being introduced to Europe in the 1500s, possibly by Cortez. By the 1700s, most Europeans thought the tomato was poisonous, apparently because of a widespread belief that aristocrats had gotten sick and died after eating them. According to the Smithsonian, the more likely cause of the illnesses and deaths could be blamed on wealthy Europeans’ pewter tableware. If stored or served on pewter, tomatoes, with their extreme acidity, would have leached lead, and hence, caused lead poisoning. Another reason for the centuries-long fear of the tomato even in America as late as the 1800s, is the fact that it belongs to the sometimes deadly nightshade family (think, belladonna and datura). While some people with intestinal conditions are bothered by the alkaloids occurring in the most common edible nightshade plants—potatoes, eggplant, peppers—most of us can enjoy them without worry.

Apple: all-knowing, all-healing? Merlin, the legendary magician, was said to carry a silver bough from an apple tree, which allowed him to cross into the netherworld and return to the land of the living. Irish folklore claims that if an apple is peeled into one continuous ribbon and thrown behind a woman’s shoulder, it will land in the shape of the future husband’s initials. But the health benefits of apples are no myths. From WebMD: “Some studies show that plant chemicals and the fiber in an apple peel protect against blood vessel and heart damage. They also can help lower your cholesterol, and they might protect your cells’ DNA from something called oxidative damage, which is one of the things that can lead to cancer.”

Garlic: keeping evil spirits at bay. For thousands of years in cultures from China to the Middle East and Europe, garlic was used to both increase physical strength and ward off vampires, witches, and other dark forces. According to a 2010 pharmacological journal article published by the United States Library of Medicine, “The Egyptians fed their slaves with garlic to make them strong and capable of doing more work.” They go on to cite the Greek historian Herodotus as saying that inscriptions on the plates of the Egyptian pyramids say the builders spent approximately 30 million dollars to keep a daily supply of raw garlic to feed their workers. So, is there any merit to garlic’s medicinal or magical uses? Yes and no. Garlic does have natural antibiotic properties. And while there have been scientific studies linking garlic intake to cardiovascular health and lowering the risk of some cancers, there’s no evidence that a string of bulbs will keep the witches and werewolves away.

UCCE Master Gardeners of Tuolumne and Calaveras Counties can answer home gardening questions. Call 209-533-5912 or to fill out our easy-to-use problem questionnaire here. Check out our website here, You can also find us on Facebook.