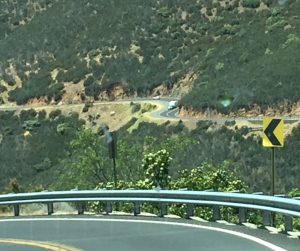 The driver of the 2017 Ram 2500 pickup, 53-year-old John Mossett of Chico, was reportedly riding directly at the rear of a 2015 Peterbilt rig hauling a gasoline tanker driven at less than 20 miles-per-hour by 64-year-old John Peeples of Salida.

Macado reports that Mossett crossed over double-yellow lines in an attempt to pass the truck around a blind curve and accelerated the pickup to at least 35 miles-per-hour as a westbound vehicle approached.

At that point, Macado says the driver of the approaching vehicle and Peeples slammed on their brakes while Mossett attempted to steer back into the eastbound lane. However, when he did so, the right side of the pickup struck the left front of the big rig, then veered out of control, overturning from the south embankment edge. After descending about 200 feet, it landed on its roof against a pine tree.

Mossett, who sustained major injuries, was retrieved from the wreckage via a rope rescue and transported by air ambulance to Doctors Medical Center. According to Macado, the two passengers, 50-year-old Tammy Mossett of Chico and an 11-year-old male family member, climbed up to the roadway to await medical assistance and were transported to Adventist Health of Sonora for treatment of minor injuries. Peeples was uninjured.

Macado adds that drugs and/or alcohol are not believed to be a factor in the collision and that the CHP is recommending charges to be filed against Mossett for misdemeanor reckless driving causing injuries to others.