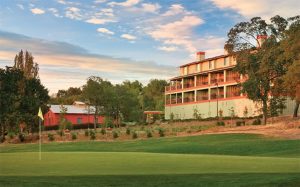 Angels Camp, CA – Several clerks at the Wyndham resort in Angels Camp were startled and shocked after a rock came smashing through a lobby window, shattering it.

Luckily, there were few people in that area of the WorldMark Angel’s Camp resort, located at 123 Selkirk Ranch Road on the Greenhorn Creek Golf Course fairway, when the vandal struck at around 3 a.m. a week ago. Calaveras County Sheriff’s Deputies learned upon their arrived that the suspect had fled on foot. Sgt. Greg Stark recounts, “Deputies Robinson set out on foot from the lobby towards McCauley Ranch Road. He heard a male suspect grunting about 200 yards away. The deputy began to order the subject to come closer, but he kept moving away.”

Another deputy joined in the pursuit. A little further up the roadway, the subject responded to orders to lay face down in the grass and he was handcuffed. The suspect was later determined to be 23-year-old Jordan Johnson of Copperopolis. Sgt. Stark details, “Johnson had multiple cuts on his hand and dried blood on them as well.”

It is unclear if Johnson was under the influence of alcohol or drugs during the incident. He faces felony charges of attempted burglary and vandalism due to the damage being over $400 along with evading an officer.