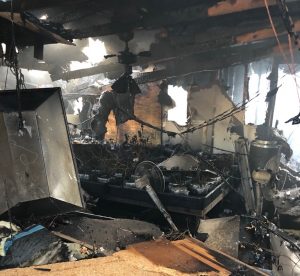 San Andreas, CA – A blaze at a boarded-up home presented firefighters with a dangerous challenge.

According to Calaveras County Sheriff’s spokesperson Sgt. Greg Stark, his office was notified early yesterday morning just after 6:30 about the fire, which ignited at a residence on the 8000 block of Center Drive in Jenny Lind. Fire staff reported that the home’s doors and windows were boarded up making entry into the structure extremely difficult.

“This is a characteristic similar to other indoor marijuana grows where the windows and doorways are sealed to conceal the illegal activity inside,” Stark explains. “Once the fire was extinguished, an indoor marijuana growing operation was located and Calaveras County investigators were dispatched to the scene to assist with determining the origin of the fire and to investigate the marijuana cultivation.”

The Marijuana Enforcement Team determined that the fire affected the areas within the home that had been converted into an illegal grow operation, estimating that 1,000 plants were destroyed, according to Stark. The reports that 58-year-old Huang Yao of Jenny Lind was on the scene and issued a citation for illegal marijuana cultivation.

“Personnel on the scene were thankful this preventable incident did not happen during the high wind event projected to occur over the next several days as high winds and low fuel moisture significantly increase fire danger,” Stark adds.