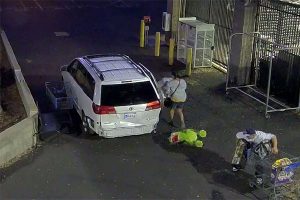 Sonora, CA – Pushing a cart filled with items from the Sonora Walmart store out the door without paying landed four people behind bars.

The pictures in the image box show the alleged thieves wheeled the basket out an emergency exit to the getaway vehicle waiting outside around 7:15 p.m. on Monday. Once loaded up, the van made its way to Highway 108 heading west. It was spotted by a Tuolumne County Sheriff’s Deputy and pulled over in Jamestown to await Sonora Police Officers rushing to the scene.

Inside the vehicle, officers found the stolen items that included camping gear, pet items, costumes and toys with a price tag of over a thousand dollars, according to police. Arrested were 35-year-old Crystal Cervantes, 38-year-old Charles Chavira Jr., 52-year-old Dawn Dubois, and 51-year-old Robert Hayani, all from Merced. Police revealed it was Cervantes and Chavira who collected items inside the store while Dubois and Hayani who waited in the van.

A search of Cervantes also turned up brass knuckles and methamphetamine. Also, while being booked into jail a second baggie of meth was found hidden in her undergarments.