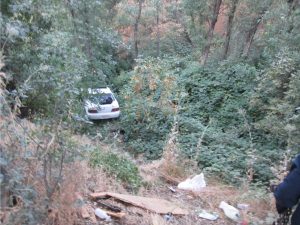 Sonora, CA — A convicted felon awaiting trial was jailed on fresh charges as deputies seek a suspect who wrecked a stolen car while driving him.

Tuolumne County Sheriff’s spokesperson Sgt. Andrea Benson states that the arrest followed a woman’s 911 call Friday morning in which she reported she was being threatened by several men in the area of Serrano Road and Mono Way in Sonora.

The victim reported she was hiding in a white sedan. According to Benson, as deputies headed towards the location from where the call was made, they spotted a vehicle matching the description and tried to pull it over. She adds that the driver led deputies on a brief vehicle chase before turning into a driveway on Serrano Road and jumping out of the car to flee on foot.

Benson says the car continued to roll off the driveway and down an embankment before crashing into some brush and trees. Deputies reported the woman who had made the 911 call and another male passenger they found in the car was not hurt. A vehicle check came back showing that it had been stolen. The driver, identified as 19-year-old Zachary Richardson, is still at large.

Deputies arrested the male passenger, identified as 36-year-old Joseph Eastman, for domestic battery. As he was a convicted felon on searchable probation, out of jail on pre-trial release, deputies searched him and found him in possession of tear gas, methamphetamine, and drug paraphernalia. He was arrested and booked into the Tuolumne County Jail on related charges.

The sheriff’s office requests anyone with information about Richardson’s whereabouts to call 533-5815. To view a photo of him click into the image box slideshow.