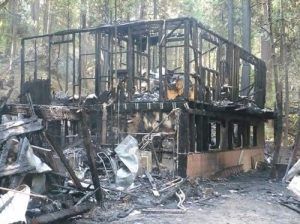 According to Detective Sgt. Matt Zelinsky the identification was made through interviews with witnesses including her son Francis Maxwell who lived at the residence. Zelinsky added that dental records will have to be checked before the identity can be confirmed.

The 911 call was received at 9:23pm. The response included crews from CAL Fire, Stanislaus National Forest and Twain Harte Fire. The fire was controlled shortly after midnight.

Cause of the fire remains under investigation.