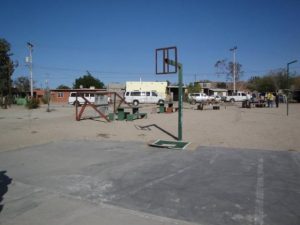 Sonora, CA — After a broiling week in Mexico the Sonora High School Interact Club has returned home to the cool and damp Mother Lode.

Traditionally the club makes an annual trip to Mexico to paint a school. However when the Club arrived in San Felipe all the schools had already been painted so the party of 12 decided to resurrect a playground for San Felipe’s children.

From Chaperon Kim Davis, "I think they really enjoyed being somewhere different. They really learned a lot about how people in Mexico live. We were able to interact with some local people there on our project. I think it was really eye opening for them … especially the poverty."

Only 12 people made the trip … usually it’s about 40 but Davis commented that many of the parents were concerned about the on-going violence among the warring Mexican drug cartels.

Davis added that San Felipe appeared to be pretty safe and there were no incidents, just a lot of hard work under the hot Mexican sun for some students who wanted to prove that "It’s better to give than receive."