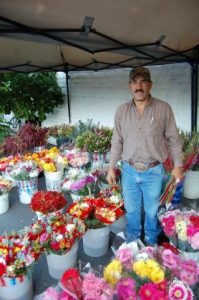 Sonora, CA – Officials of Sonora’s Certified Farmers Market say residents gave generously to help the father of five who was killed in a crash this summer. 49 year old Eleazar “Ed” Rodriguez of Galt died after a head on crash on Highway 49 near the Carol Kennedy Road intersection in San Andreas on September 29th.

The market had a memorial set up with a donation bucket for three weekends. Along with that, many of the vendors gave all or part of one Saturday sales to the family.

“It is surprising that much money was donated, but not surprising because of how many people he touched with his kindness and his smile and the positive words he always had. It is really amazing.” says O’Hare.

Rodriguez’s 10 year old daughter suffered major injuries and was air-lifted to UC Davis Medical Center after the accident. O’Hare says she is getting better each day. She also says the family has decided to re-open the flower booth at next summer’s market.

Also killed in the crash was 52 year old Penny Miles of Murphys. CHP says she was intoxicated at the time of the wreck.