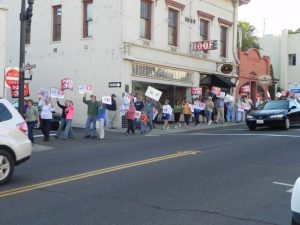 Sonora, CA – Some educators, parents and residents hit the streets of Sonora to show support for Governor Jerry Brown’s tax initiative and to urge voters to say no to Proposition 32.

Prop 30 is Brown’s proposal which calls for an increase in the state sales tax and incomes taxes on earners making over $250,000. Some of the money raised would go to school funding. Prop. 32 prohibits political contributions from payroll deductions. The group of about 50 people marched from Sonora Union High School to the Court House Park for a rally yesterday evening.

One marcher says, “Voting no on Prop. 32 will protect the ability of everyday Californians to have a voice about issues that matter and to prevent Super PACs from taking over our political process”.

A rival budget measure on the November ballot is Proposition 38 which would increase income taxes on most Californians, not just the highest earners.