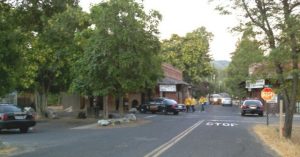 Five Sheriff’s Office vehicles were staged at the park Wednesday evening near the St. Charles Saloon. Some myMotherLode.com readers have been asking us, “What happened?”

The Sheriff’s Office reports that deputies were on scene because of three separate incidents that occurred within a short period. Some people had reportedly gotten into a bar fight. Another person reported a stolen purse. And the third incident was related to gunshots being fired (It ended up being a demonstration of a black powdered weapon in the state park).

Sgt. Jeff Wilson of the Sheriff’s Office reports that no one was hurt or arrested.