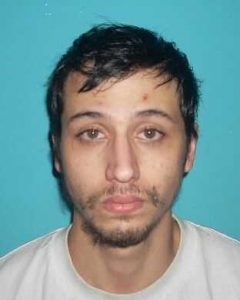 Sonora, CA – While being arrested for trying to cash a stolen check, a search of the suspects’ vehicle uncovered a loaded handgun.

Tuolumne County Sheriff’s Deputies were called to the Money Mart in the Junction Shopping Center on Mono Way in East Sonora. Once on scene, they questioned 42-year-old Cali Gibb and 27-year-old James Brant, both from Discovery Bay. Deputies learned that Brant had tried to pass a check with the same person’s name on it at a Sacramento Money Mart weeks earlier. A call to the victim named on the check revealed that a briefcase and checkbook were stolen from his car.

The pair was taken into custody and their 2007 Ford Mustang was searched. Sheriff’s spokesperson Sgt. Andreas Benson details, “Inside deputies uncovered a loaded 9mm Glock handgun, methamphetamine, drug paraphernalia, a stolen cell phone, two vehicle pink slips that had been washed of all information, a US Bank card, and a debit Visa card containing altered information.”

While being processed at the jail, a search of Brant turned up a small bindle of methamphetamine. Both face charges of forgery, carrying a concealed firearm, addict in possession of a firearm, drug possession, and conspiracy.