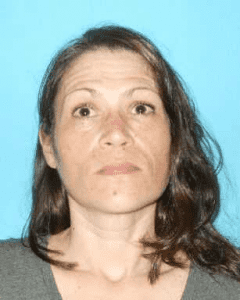 Sonora, CA — Deputies drawn to a Sonora home for reported vandalism wound up arresting a neighbor for attempted arson after the suspect shared premeditated plans to set the homeowner’s residence ablaze.

According to Tuolumne County Sheriff’s spokesperson Sgt. Andrea Benson, a complaint call came in from a Phoenix Lake Road resident this past Saturday afternoon soon after the victim heard a loud noise near the front of the home and then spied a neighbor walking away with a hammer in her hand. A broken garage window and damage to an RV were both found and believed to have been caused at the time. The suspect, 43-year-old Alayna Moro, reportedly returned to the property a short time later holding a gas can and lighter but turned around and left after seeing the homeowner.

Benson adds that responding deputies caught up with Moro on her property where she confessed to causing the damage to her neighbor’s window and the RV’s headlight and bumper. She also admitted to damaging a rental car parked on her own property and additionally told deputies that she intended on burning down her neighbor’s house. She further explained that her plan was to light a rag in the gas can and throw it through the home’s front window but it was seeing the homeowner looking back at her that startled her into leaving before doing so.

While there are no details available as to why Moro was planning to set her neighbor’s home on fire, the suspect, who is on probation for burglary and vandalism, was booked into the Tuolumne County Jail on felony charges of attempted arson, three counts of felony vandalism and for violating her probation. Due to the latter charge she is being held without bail.