A Gourmet Thank You To Fire Personnel 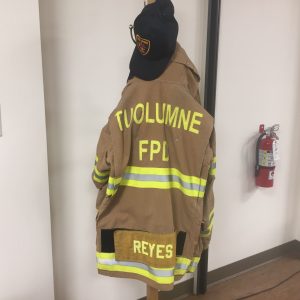 Columbia, CA — With all the tables filled in the Cellar Bistro at Columbia College, supporters thanked area fire personnel and opened their wallets to helped future firefighters.

The Heroes and Helmets dinner was held recently at the Manzanita Building on the campus in Columbia. Those in attendance paid $60 to be served a four course meal prepared by the college’s culinary class under the tutelage of Chef Don Dickinson to tantalize their taste buds. The servers were students from the school’s fire academy. All the proceeds went to the school’s hospitality management program and the Jordan Reyes Columbia College Fire Academy Scholarship fund.

Reyes graduated from the academy and was a firefighter with the Stanislaus National Forest when he was killed in a motorcycle crash on Highway 108 near Twain Harte in 2011, as reported here. Bruce Cannon, Jordan’s stepfather, shares how the scholarship fund started, “When our son Jordan went through the academy, we saw such a growth in Jordan where he went from really just a young kid to such a fine young firefighter by the time he was finished.”

Academy graduates must still complete six months of full-time or one year of part-time experience before applying to the state for Firefighter I Certification.  Cannon says he and his wife, Faylan, saw first-hand the costs to get a firefighting career going and believe help in funding is key. “It began as a small self-funded scholarship. What we did was give $350 dollar to a graduating academy member,” states Cannon, who adds, “That’s grown into a $1000 scholarship, which we give every spring and fall semester with the help of supporters. One of the things we‘re trying to do is grow the fund for the scholarship so it’s around forever.”

A huge supporter of the scholarship is Sonora Fire Chief Amy New as she was a graduate of the academy. “Not only does the City of Sonora Fire Department gain something from this program, but all the fire districts in the county gain something,” shares New. She explains,  “We’re getting a qualified, trained firefighter out of the academy that can go right into one of our resident programs or internships or as a volunteer. We continue their training in a live environment and they’re out there doing the job of protecting the citizens of this county and hopefully we’re helping them in getting a career.”

The scholarship is also funded through the Jordan Reyes “Drive For Life” Blood Drive held in Sonora the Tuesday before Thanksgiving every year, as reported here.