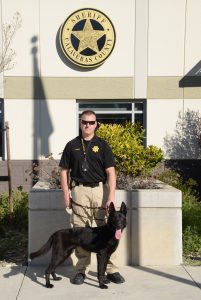 San Andreas, CA — With a lot of help from local friends a new public safety patrol in Calaveras County is now able to prepare for its impending street beat debut.

Calaveras’s sheriff’s officials say a new K9 team in training, led by Corporal Jim Moser, an 11-year veteran with the department who also serves as a Field Training Officer, Impact Weapons Instructor and SWAT team member. His new partner is K9 Deputy Nox, a Malinois German Shepherd mix, hailing from the Netherlands and brought into the United States from the police canine breeding and training company VLK Europe.

According to Sheriff Rick DiBasilio, VLK Europe canines are known for their high level abilities not only for apprehension and detection but also their social skills, Nox will be tough on crime but kind-hearted and gentle with those he protects.

Donations made to the nonprofit Friends Of the Calaveras Sheriff’s Office (FOCSO) organization funded the purchase of Nox and his training. Sheriff’s officials say the group has since its inception in 2012 helped provide equipment and other resources that would not otherwise be affordable by the department. They add big thank yous are also in order for Arnold Pet Clinic, which will be providing basic healthcare for Nox at no cost; also Spence Feed in Angels Camp, now donating food and some supplies as needed. Other donations to the Calaveras K9 program may be made through FOCSO.

Corporal Moser and Nox must now complete 320 hours of canine training in Modesto, where the corporal will help train Nox in narcotic detection, tracking and apprehension in various areas and scenarios ahead of the pair’s new local assignment. During the process they will be training with other new handler teams from neighboring agencies, allowing them at the same time to further build the department’s community resource network.