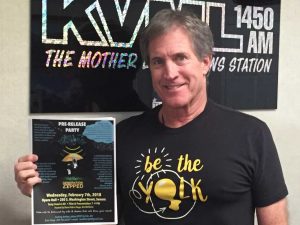 Tonight at the Sonora Opera Hall, there will be a completely free screening of a documentary called “Generation Zapped”.

Dave Stapp, who will present the documentary, was Wednesday’s KVML “Newsmaker of the Day”.

“Generation Zapped”, is a new documentary revealing the high cost of our addiction to digital devices and the health risks, especially for children and teens, from exposure to wireless radiation.

“This movie is all about electropollution”, said Stapp. “It’s a tremendously educational piece that I think everyone should see, especially families with children. The documentary is going to be released to the public for sale in April. We have the rights to host a “pre-screening” of the video and we are going to show it tonight for free at the Sonora Opera Hall.

According to Stapp, there should be an increase in public awareness of the issue and the public should also know that there are solutions.

“Wireless technology can pose serious health risks, from infertility to cancer. Through interviews with experts in science and public health, along with people suffering from high sensitivity to wireless radiation, the film suggests ways to reduce your exposures and protect your family,” said Stapp.

According to a Press Release: Emerging science is revealing the concerning reality that many people may suffer health impacts from radiation from wireless devices. In Generation Zapped, as breast and brain cancer, associations with increased infertility, genetic mutations related to autism and ADHD and newly developed illnesses, such as Electrical Sensitivity (ES). Children and teens are especially susceptible to radiation from baby monitors, tablets and cell phones, and wireless routers in the classroom. Generation Zapped empowers audiences to understand how to reduce their exposure to protect themselves and their families.

Stapp invites everyone to bring their family and friends to tonight’s event. The doors will open at 6:30 PM with the screening starting around 7 PM. There will be discussion and information presented at the end of the movie, so stick around during the credits.

No reservations for the free screening are necessary. For more information call, 209-743-6522.