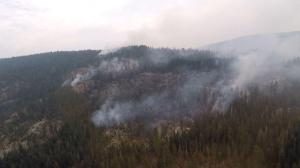 The Bummers Fire is estimated to be around 150 acres and burning in the remote area of Bummers Flat in the Summit Ranger District. It ignited on September 11 and firefighters are managing the incident for ecological benefit.

In addition, the 1,335-acre Creek Fire continues to burn in the Mi Wok Ranger District of the forest. It ignited on September 3rd near the Clear Lake and Bourland Mountain region of the forest.

Both were putting up smoke this afternoon, and were visible from areas of Tuolumne County. The Stanislaus National Forest reports that both incidents are in isolated regions and are not a threat to communities.