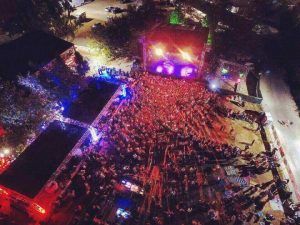 Sonora, CA — While “Unruly” in name this past weekend’s convergence of country music and contests for barbecue cooking, bull-riding and corn hole turned out to be a harmonic one, all things considered.

Recounting Saturday’s inaugural Unruly Brew and Que Fest, hosted at the Mother Lode Fairgrounds, Trado Restaurant Corporation principal Doug Kennedy gushes that even while receipts are still being counted, “We couldn’t be happier with the way things turned out. It took a lot of time and planning and we wanted to put something different on in Sonora and I think we pulled that off and things came off with out a hitch.”

The hybrid extravaganza according to Kennedy, drew somewhere between five to six thousand attendees from the time the gates opened at 11 a.m. until its close at 10 p.m. In addition to hot rising country star Luke Combs — who is vying for the CMA New Artist of the Year next month — Tucker Beathard, Luke Pell and Chris Bandi all turned in musical performances. Combs, Pell and Bandi even showed up afterwards to hobnob with fans at the nearby Bourbon Barrel adjacent to where Kennedy’s entertainment and retail complex that remains under construction.

A Successful Three-ring Circus Of Contests

Kennedy also shares that, participation-wise, all the slots were full for the corn hole tournament, which offered a $3,000 prize purse. He maintains the barbecue competitors were top-notch and gave great feedback. “The contestants were thrilled with the facility being able to accommodate their needs,” he notes. Upping the purse from $2,000 to $12,000 for the competitive bull-riding events he adds drew some of the best riders in the region, so plans are to grow it into a bigger regional event next year. He emphasizes that the festival will be a major anchor event Trado is slating annually for the last Saturday of September.

“From the financial side we are really pleased with the way things ended up for the event and the festival. The profits that we took in the and most of the money that we brought in that was on the profit side, we are going to keep reinvesting in the event,” Kennedy claims. Continuing, he comments, “We do want to grow this. We want it to be something that people travel from all over Northern California and even out of the state to come visit and come experience our great town.”

Local law enforcement agencies concur with Kennedy that festival goers were well-behaved with only two arrests, not untypical for a regular Saturday night. He also gives kudos to the efficiency of the Tuolumne County transit shuttles. “Fifteen minutes after event ended people were on buses and there were not any problems..that is really a hats off to the community,” he says happily. To view some event images, click into the image box  slideshow.

Trado Construction Schedule Back On Track

Kennedy confides he is now tracking to have his Green Dog Brewing Company and the other planned spaces ready by April 5, 2018. As reported here, recent reports that its completion date was possibly moving out several more months helped trigger a decision by its theater company partner, Stage 3 to announce it would “go dark.” The group had earlier vacated its space there while it was being renovated, and was struggling with attracting audiences to temporary venue locations.

“There was a [construction] break for a few weeks,” Kennedy admits, explaining that his contractor was called away to help finish the new Sonora High pool complex. While he has not recently been in touch with the folks at Stage 3, he says matter-of-factly, “I am a music guy as a background and worked in the music industry for a long time but I am fully committed to the arts. We absolutely intend to have live performances, live plays, live entertainment inside the theater at the Green Dog. If that ends up being Stage 3, we are going to be very happy about that. So we do have dates that we will hold for them — or any theater groups that want to approach us and talk to us about that.”

Too, Kennedy states, he is ready to begin working with the City of Sonora on projected plans to close down the Bank of America parking lot, city lot and Green Street during specific times for two concerts in tandem with the Mother Lode Round Up Weekend. He says ideally, he would like to host even more events in that outdoor area, stressing, “Keeping it nice and fun and clean — and not just for those people who are into country but also classic rock and things for kids and families to come downtown and do.”