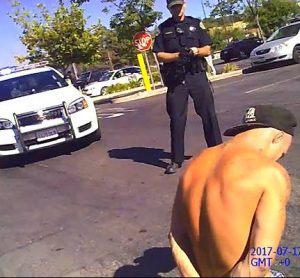 Sonora, CA — A Tuolumne County man was booked into jail on charges of assault with a deadly weapon, vandalism, robbery and obstruction.

At one point, Scrivner allegedly tried to remove the cash register from the counter and leave the store with it. Store employees, and some customers, followed him outside, where he continued to be erratic. Scrivner then threw a large rock at a customer, causing injuries to the person’s knee. Scrivner then started to head across Old Wards Ferry Road towards Starbucks, throwing more rocks at people, and vehicles.

Chief Vanderweil attempted to subdue Scrivner with a taser, but was unsuccessful. Scrivner reportedly became more aggressive, and was eventually placed under arrest at gunpoint. The police department notes that additional witnesses are being located, and more charges may follow.