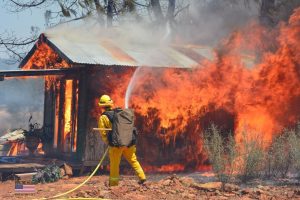 Update at 2:30 p.m.: CAL Fire spokesperson Lindy Shoff reports the Flat fire that was burning in the Jamestown area along the 11300 block of Peoria Flat Road off O’Byrnes Ferry Road has been contained at two acres. There remains on scene, six engines and three crews that will be mopping up for the next couple of hours. Investigators were on scene but have not yet determined what sparked the blaze. Two outbuildings were damaged in the fire, according to Shoff.

A special thanks to community news partner Darin McKinney for emailing photos. Pictures can be sent to news@clarkebroadcasting.com.

(Further details on the fire can be viewed below.)

Update at 1:41 p.m.: CAL Fire officials estimate a vegetation fire near Jamestown and southern New Melones reservoir now being called the Flat Fire is about two acres in size with a slow rate of spread.

Firefighters are making progress, according to CAL Fire spokesperson Lindy Shoff, because they have a line around the fire and it appears to be holding at this time. Two outbuildings have been damaged but there is no current threat to any other structures.

The cause is still being investigated.

Update at 1:15 p.m.: CAL Fire officials estimate a vegetation fire near Jamestown and southern New Melones reservoir as being an acre to an acre-and-a-half with a slow rate of spread.

Situated in the 11300 block of Peoria Flat Road/Shell Road near the intersection of New Peoria Flat Road, the blaze is off Highway 108/120 across from Yosemite Junction just off of O’Byrnes’ Ferry Road on the way to Baseline Camp.

CAL Fire spokesperson Lindy Shoff says no structures are currently under threat. On-scene are eight engines, both Columbia air tankers and Air Attack. No cause has yet been determined.

Origional 1:10PM Jamestown, CA — Firefighters and Columbia air resources are responding to the report of a vegetation fire just outside of Jamestown near the southern end of New Melones reservoir.

CAL Fire reports the blaze is situated in the 11300 block of Peoria Flat Road/Shell Road near the intersection of New Peoria Flat Road, off of Obyrnes Ferry Road toward the Highway 108/120 and the Yosemite Junction. There is no word yet on whether any structures are threatened. Motorists in the area should slow down and use caution. We will provide more details as they come into the news center.