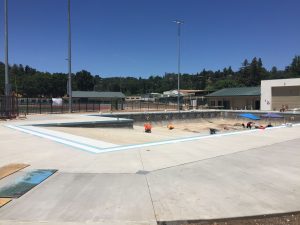 Sonora, CA — The final project funded by Sonora High School’s $23-million Measure J bond should be completed by around the first of August.

Superintendent Pat Chabot says plastering should begin this week on the new pool, and it will soon be filled with water. It is expected to take a couple of weeks to then get the chemicals and chlorine to the right levels.

The contract for the aquatics center was an estimated $6.3 million, which district officials had stated was about $1.5 – 2million more than what was anticipated before a lawsuit slowed the project. Increased costs were attributed by the district to the delay in beginning construction.

Chabot says, combined, the four Measure J projects (aquatics center, stadium, humanities building and cafeteria) will cost the district approximately $300,000 more than what was available from Measure J, so the additional money will come in the form of deferred maintenance revenue.

It remains to be seen what will happen to the current pool, which is still in use this summer. Chabot notes, “Once the new pool is up and running and perfectly working great, we will decommission the old one. We’re not exactly sure how much we can do with that area right now because we have run out of funds due to the lawsuit, to completely decommission it. The buildings will probably remain there. Maybe we can use them for storage, or one of the ideas is to use it for our opposing team’s locker room.”

It is not immediately clear how much additional money it will cost to operate the new pool. While the newer technology makes it more efficient, the increased size will result in higher overall costs, according to Chabot.

Chabot talked about Measure J and other topics on Mother Lode Views this past weekend. You can hear the show by clicking here. Other items discussed included the Dome and Wildcat Ranch properties, and the new budget.