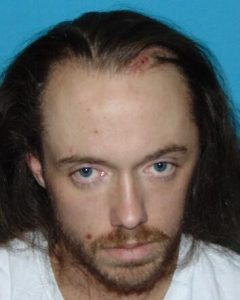 Jamestown, CA – The sound of vehicles being opened and apartment door knobs being jiggled perked up the ears and eyes of residents in a Jamestown neighborhood resulting in a drug arrest.

Tuolumne County Sheriff’s Deputies were alerted to a suspicious man jumping into vehicles and checking for unlocked apartment doors in the Jamestown Terrace Apartments on Preston Lane Tuesday night just before 10 p.m. Deputies responded to the call and found 30-year-old Adam Hoskins hiding in an apartment stairwell. During questioning Hoskins admitted to being on heroin. Deputies searched him and found methamphetamine, drug paraphernalia, a scale and pepper spray.

Thanking residents for calling in, Sgt. Andrea Benson cautions the public, “We urge residents to keep their doors locked and avoid becoming a victim of a crime of opportunity. Do not leave valuables in sight in your car or home. Also don’t leave personal information lying around in your vehicle where it can be easily accessible or seen from the windows.” Benson adds do not leave garage door openers in your vehicle or leave it running.

Hoskins was arrested and booked into the Tuolumne County Jail for possession of unlawful paraphernalia, narcotic controlled substance, and a felon having pepper spray.