No Clowns Allowed At All Hallows Faire 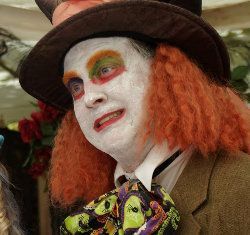 Sonora, CA – Organizers of Sonora’s All Hallows Faire are banning clown costumes in reaction to recent pranksters dressing up and lurking around schools and neighborhoods across the country – sparking several arrests.

Event organizers released a statement calling it a “negative trend that has to be stopped and not supported.”  Co-manager Patrick Karnahan maintains, “We certainly don’t mean anything negative toward Shriners and other groups that are very positive but it’s just too scary. In the fact that their creeping around school yards and it’s just real negative right now, so we just decided, since we do have people who show up in clown outfits that we just discourage people and ban them from wearing those outfits.”  Karnahan adds that anyone dressed as a clown will be asked to take off their face makeup in order to pass the gates. He encourages revelers to stick to animal costumes, fantasy or Celtic theme.

This is the eighth year of the faire, which runs two days, October 22 and 23 at the Mother Lode Fairgrounds.  Karnahan notes that most people he’s informed of the ban have applauded the idea saying clowns not only give their kids nightmares but themselves as well.