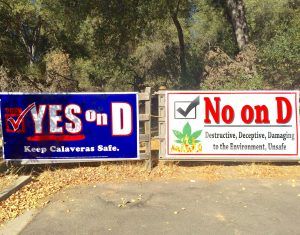 Angels Camp, CA — A month before Election Day, police, seeing a trend of disappearing “Vote NO On Measure D” Cannabis Regulation signs, are alerting would-be absconders that taking them — or any other legally placed campaign sign — is an arrestable offense.

According to Chief Todd Fordahl, each sign is valued at about $90. That means the total of just the eight reported as missing is around $720. Grand theft, under state law, includes taking property worth $950 or more. It is a “wobbler offense,” meaning that it can be considered either as a misdemeanor or a felony; depending on the particular facts of the case as well as the accused’s criminal history. Misdemeanor level penalties for those convicted of the crime include fines and up to a year in county jail.