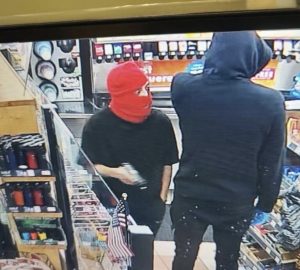 Sonora, CA — The Sonora Police Department has released a surveillance photo captured of the suspects who carried out an armed robbery at the AM-PM Express Mart on Pesce Way.

It happened this morning (August 11) at around 4am. They held the cashier at gunpoint, stole an undetermined amount of cash, and ran away toward Highway 49.

The PD reports that one suspect wore a dark hoodie and a red bandana-style face covering. The other person was wearing a dark t-shirt and red ski mask. Both suspects are believed to have light to medium complexion skin. The weapons used appear to be a semiautomatic pistol and an assault rifle.

This is an active investigation and the suspects are believed to be dangerous. Anyone with information on the incident is encouraged to call the Sonora PD at 209-532-8141.