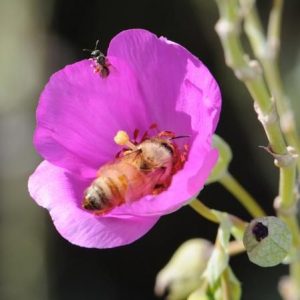 Bumblebees are like black and yellow fur coats as they buzz around our gardens. More than 30 species have been identified in North America but I’ve yet to determine with certainty the species in my own yard. Bees just don’t hold still long enough to take a good look.

Fortunately there are simple identification guidelines for non-entomologists. First is size; big ones up to an inch long to little ones maybe half an inch in length. Most bumblebees are either yellow and black, or sometimes orange and black with bands in varying size and locations. Others may have a rusty patch or bits of white on the abdomen or “back end.” To better identify bumblebees, go here.

Several bumblebee species are considered imperiled or even extinct due to diseases brought in from European bees, habitat loss, pesticides and climate change.

If you see a large, black shiny “bumblebee,” it is likely to be instead a carpenter bee, so called because it excavates holes in wood for its nests. Carpenter bees are also pollinators.

Unlike the European honeybee, bumblebees are true natives. They coevolved over the centuries with our native plants and thus are excellent pollinators of these plants. Bumblebees emerge earlier in the spring and are more active in cooler weather and in lower light than honeybees. They may even fly in light rain. Many, with long tongues, can reach into tubular flowers such as lupine, penstemon and larkspur.

Bumblebees excel at pollinating certain crops such as blueberries, tomatoes, peppers, squash and eggplant. They have the special ability to “buzz pollinate” (sonicate) flowers to release pollen. They achieve this by grasping a flower and vibrating their flight muscles producing a sound roughly at the frequency of a middle C musical note. Listen near your tomato plants and you may hear their distinctive buzzing sound.

Protect bumblebee nests as they are one of the pollinators that help feed the world. Depending on their species, their nests may be below ground in an old rodent burrow or in a variety of areas such as a tree stump or even an old mattress destined for the dump. We once found a nest under an overturned stock watering trough.

The queen builds a nest in the spring in which she stashes pollen and nectar. She then lays a dozen or two fertilized eggs. She warms the nest with wing muscle contractions. Once the offspring mature, they become new worker bees whose job is to guard the nest and to gather nectar and pollen for new larvae. The worker bees may live from a couple of weeks to several months. Nests have up to a hundred or so bees. Bumblebees rarely sting unless their nest is threatened.

In the fall, the queen lays unfertilized eggs which develop into males and some queens, which then leave the nest and mate. The males die and the newly mated queens overwinter to begin new colonies in the spring. The old queen and her offspring die.

Bees, like humans, are fond of brightly blooming flowers. Blue, purple, violet and yellow are especially attractive to a bee. In addition to the crops previously mentioned, lavender, Mexican sunflower (Tithonia), Russian sage, manzanita, Oregon grape, and vetch are among those flowers you can grow to help feed bumblebees.
www.xerces.org has interesting articles about bumblebees and other pollinators plus a link to Bumblebee Watch, a program for citizen help in tracking bumblebees throughout North America.

Vera Strader is a University of California Cooperative Extension Master Gardener of Tuolumne County Master, and is happy whenever she sees bumblebees “bumbling” about in our native California poppies.