Flight of the Monarch Butterfly 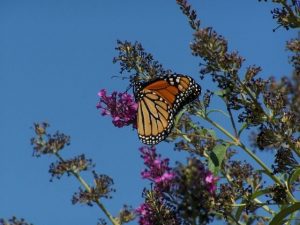 How does an insect that has never flown long distances decide to fly from Canada to Mexico? And how does it land on the same tree that was home to its great, great grandparents? The milkweed-hungry monarch caterpillar will outgrow and shed its skin four times. On the fifth time the caterpillar dissolves into a chrysalis and ten days later, the monarch butterfly emerges.

According to the 2015 USDA pollinator report, beekeepers lost 40 percent of their honeybee colonies last year. Over the past 20 years monarch butterfly migration to Mexico has dropped by 90 percent. In May 2015 The White House released its long-awaited plan to unite the US, Canada, and Mexico around butterflies, bees, and other pollinators. According to the US fish and wildlife service, unless we act now to help the monarch, it could disappear in our lifetime.

The state of monarchs reflects the health of the American landscape and its pollinators. Monarch declines are symptomatic of environmental problems that pose risks to food production and our own health. Areas rich in butterflies and moths are rich in other invertebrates that collectively provide benefits ranging from pollination and pest control to food supply for insectivorous animals. Each butterfly and moth evolved its own chemicals to deter predators and parasites, and overcome the chemical defenses of its host plant. These chemicals have human value. Powerful antibiotics have been found in a wide range of species called the meadow brown. Monarch larvae only eat milkweed. Some species of milkweed have chemicals called cardenolides, which are poisonous to many insects and birds. Female monarchs prefer to lay their eggs on milkweed species containing cardenolides. When the larvae eat these milkweed species they uptake the poison and are protected from predators. The larvae pass on their poison to the adult monarchs that advertise toxicity with beautiful colorations.

At his lab at Emory University in Atlanta, Jaap de Roode and his team are studying Ophryocystis elektroscirrha, a parasite crippling monarch populations worldwide. They found that monarch larvae are treating the adult phase by choosing a milkweed species containing chemicals that reduce parasitic infection in the butterfly. Understanding the relationship between monarchs, medicinal milkweed, and parasites is helping mankind, who has long looked to animals to find remedies for human diseases.

“The situation is desperate,” says Karen Oberhauser, a biologist with the Department of Wildlife and Conservation Biology at the University of Minnesota. “We plan to restore and protect seven million north-south acres of pollinator-friendly habitat and invite pollinators back to an intercontinental highway that was destroyed by pesticides.” She encourages people to get involved by putting in flowers as sources of nectar for bees and butterflies. Plant milk weeds to attract and feed the monarch caterpillars.

At winter’s close, Mexican monarchs wait for favorable conditions. The first generation flies to the Gulf States, mates, and dies in a month. The next generation continues to the northern US, where they, too, mate and die in about a month. The third generation flies to Canada and the northeastern US, also surviving a month. It is the 4th generation that lives nine months and flies all the way back to Mexico in an epic trip covering up to three thousand miles. Their southern destination is twelve southwest-facing slopes located in sixty square miles of Mexico at an elevation of ten thousand feet. The forest’s canopy protects the butterflies by keeping the rain out and the heat in. The monarch butterfly’s multigenerational cycle depends on fresh water, nectar, and milkweed.

The monarch butterfly is only one example of the interconnectedness of all life on earth. If we pollute any area, there are serious consequences. To stop our dependence on pesticides and fertilizers, we need to be more organic in our gardening practices. Composting our wastes nourishes garden soils and, compost used as mulch, cuts down on destructive insects in the garden. Planting native flowers and shrubs will lure butterflies and bees, and are less attractive to destructive insects.

Don Bojnowski is a University of California Cooperative Extension Master Gardener of Calaveras County. Adapted from Don Bojnowski’s article, “Flight of the Monarch Butterfly – Part One”