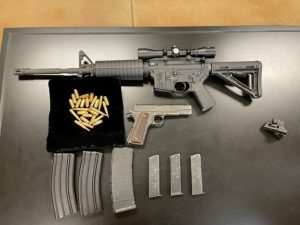 Valley Springs, CA – Getting caught while burglarizing a house was not the only mistake by two Valley Springs men—one gave a false name to a deputy who was an old classmate.

A homeowner who was on vacation was alerted to strangers in his house by security cameras, prompting him to call 911. Calaveras Sheriff’s Deputies responded to the 5000 block of Baldwin Street and discovered two suspects, 29-year-old Octavio Hernandez and 32-year-old Enrique Julian Espiritu, both of Valley Springs, at the home.

When deputies confronted Hernandez, he gave a false name to the deputy. It was not a smart move since the deputy went to school with him, and he knew his real name. That led to a search of Hernandez’s vehicle that turned up a semi-automatic rifle (AR-15), a semi-automatic handgun, and ammunition for both firearms.

A search around the property uncovered evidence of forced entry to the residence, and shoe prints around the house matched the shoes worn by Espiritu. Both were arrested for felony burglary and vandalism, among other charges. Hernandez is being held without bail due to a violation of probation. Espiritu’s bail was set at $100,000.