Invasive Plants Are Changing with the Times 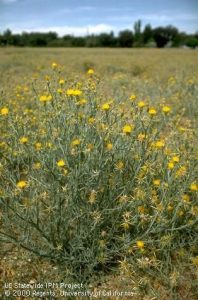 Frosts now come later in the fall and end earlier in the spring. Longer seasons and warmer weather combine to be a game changer in the plant wars.

Researchers report that some nonnative plants adjust their flowering schedule faster in concert with the longer growing season. They then elbow out natives while snatching up a greater share of nutrients and water.

According to Bruce Babbit, past Secretary of the Interior, “The invasion of noxious alien species wreaks a level of havoc on America’s environment and economy that is matched only by damage caused by floods, earthquakes, mudslides, hurricanes, and wildfire. These aliens are quiet opportunists, spreading in a slow motion explosion.”

How Do Invasive Plants Spread?

Invasives appear around the world at an ever-increasing speed. Their proliferation is aided by trade, transport, and agriculture. Wind and water further pitch in.

On their home turf, invasive plants are kept in check by natural controls like food and water supply and birds and insects that feed on them. They have been transported to California both intentionally and unintentionally.

Why Worry About Invasive Plants?

Does it really matter if alien plants overrun back yards, fields and forests? The problem: most native insects cannot eat alien plants. Our insects then disappear impoverishing food availability for birds and other creatures. In turn, the food supply is jeopardized for larger and larger animals.

About 75 percent of our food relies directly or indirectly on insect pollinators. If pollinators become out of sync with their food sources, they fade away and the human food supply too diminishes.

Disturbed areas are especially vulnerable to invasive invasion; their rambunctious growth and litter can then foster wildfire. Dense stands of Scotch, French, and Spanish broom sport yellow sweet-pea-shaped flowers that are so attractive homeowners often plant them in their yards. Unfortunately brooms can also clog waterways while crowding out native plants, the food source for wildlife.

Automobile tires spread European yellow starthistle seeds willy-nilly along our roadways. Yellow starthistle is one of California’s worst economic and ecological threats that can provide fuel for late summer wildfires and is poisonous to horses.

What Can We Do?

Take immediate action whenever you see bad guys encroaching. Stopping emerging weeds in their tracks makes a tremendous difference in preserving native habitat whether in forests or backyards. Establish instead native plants and biodiversity, including birds and insect pollinators, will follow.

Extensive lists of both California natives and invasives can be found at www.calflora.org/. For additional planting ideas, see their listing for the foothills here..

Contact the University of California Cooperative Extension Master Gardeners of Tuolumne County Hotline at 209-533-5912 (mgtuolumne@ucdavis.edu) for more information and advice.