Porch Pirate Pretends To Deliver Packages But Makes A Switch 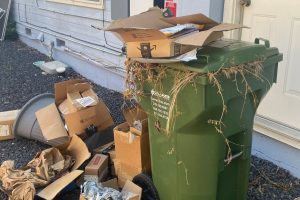 The case began on Thursday, April 14th, when Tuolumne Sheriff’s Deputies were alerted to a package theft. The exact location was not disclosed by sheriff’s officials. A look at surveillance video in the area showed a white sedan with a driver who, it appeared, was pretending to be a package delivery worker. In the footage, the suspect would stop in front of the intended victim’s home and approach, carrying a package before stealing or swapping packages on the victim’s porch.

The next day, on Friday, April 15th, the Sonora Police Department also received a report of a package theft that appeared to involve the same suspect. Further review of the surveillance video allowed deputies and police officers to identify the license plate of the vehicle and revealed that the owner was an Angels Camp resident. Working with the Angeles Camp Police Department, on Tuesday, April 26th, a search was conducted on the property in the area of Suzanne Drive, off Highway 4/Vallecito Road. After recovering multiple packages and property inside the suspect’s vehicle and residence, deputies discovered 12 potential victims of package theft.

The suspect’s identity was not released, but sheriff’s officials say the suspect is known. They added that the case has been sent to the district attorney’s office for prosecution as deputies are still in the process of contacting and identifying victims and returning property.