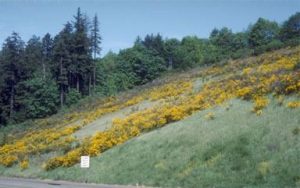 Scotch broom, desired for its bright yellow flowers and rapid growth, was first introduced into North America as an ornamental and for erosion control. However, its ability to outcompete native plants and form dense stands has also made it one of California’s worst wildland weeds.

The mites cause galls, small abnormal growths on the plant’s buds, to form during feeding, greatly reducing Scotch broom’s ability to grow and reproduce. This mite is considered to be an ideal biological control agent due to its specialized feeding habits and the debilitating damage it can cause to invasive weeds. In some areas, the gall mite has already killed large stands of broom.

The Scotch broom gall mite, more closely related to spiders and ticks than insects, is a type of eriophyid mite that is nearly invisible to the naked eye, measuring roughly the width of a human hair. Although the mite is tiny, the galls formed by plants in response to the mite’s feeding are quite noticeable. The small fuzzy masses occur along the length of the stem and can be quite numerous.

Since the first detection in El Dorado County, USFS, UCCE, and the California Department of Food and Agriculture have been on the lookout for other occurrences of the gall mite on Scotch broom. Surprisingly, the mite has since been found in many areas throughout El Dorado, Placer, and Nevada counties; but how it got there is a mystery. Mites are known to travel long distances using wind currents and by hitching rides on animals, humans and equipment. It is likely that many more finds will be forthcoming.

Since the mite is a beneficial biological control agent and not a pest, do not apply pesticides to kill it! The broom gall mite can help greatly in the fight to control Scotch broom plants that have invaded wildlands throughout California.

Although some retail nurseries still sell a variety of broom species, homeowners should avoid planting them. Depending on your climate, a number of alternate plant species with similar attributes that are not invasive weeds may be available.

Scotch broom currently infests millions of acres throughout California, causing loss of native plant biodiversity and an increased fire risk. The USFS and other agencies spend a considerable amount of time and taxpayer money each year treating Scotch broom plants either by applying herbicides or prying them up by the root. With the mites’ help, we’ll make much greater progress toward reducing Scotch broom infestations.

Help us track the spread of this beneficial mite! If you see evidence of Scotch broom gall mites, report it on the University of California Cooperative Extension website: ucanr.edu/broomgallmite, or call the Master Gardener Hotline: 209-533-5912.

Scott Oneto, is the Farm Advisor at the UC Cooperative Extension, Central Sierra.