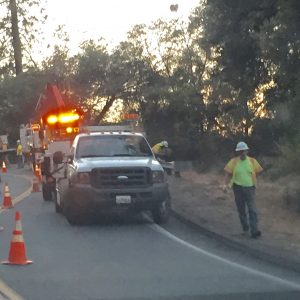 The crash occurred at 1:20pm on Highway 49 near Center Street. The CHP reports that 69-year-old Joseph Mazzaferri of Jackson was driving the 2013 Kenworth on Highway 49 near Center Street. The truck failed to negotiate a curve, overturned, and then hit a guardrail. No other vehicles were involved the crash. Mazzaferri was flown by helicopter to UC Davis to treat major injuries.

As you can see in the photos, Caltrans is back on scene this morning making repairs to the guardrail. It is causing some traffic delays for commuters.