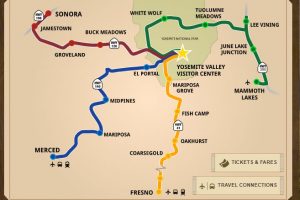 Sonora, CA – The Yosemite Area Regional Transportation System (YARTS) will now own its fleet of buses with a jump start from the federal government.

The Federal Transit Administration (FTA) has fueled YARTS with a $4.6 million grant to buy five new over-the-road coaches. YARTS officials explained what owning all the buses will mean, stating that it “can operate more efficiently throughout its six-county, 480-square mile service area rather than depend on the availability of leased vehicles during the peak summer season when visitation to Yosemite is high.”

The buses run on clean diesel and will be ADA-accessible with restroom facilities on board. YARTS officials anticipate adding the new coaches to the park routes in the summer of 2023.

“This investment in YARTS vehicles is an investment in the sustainability of Yosemite National Park,” said Christine Chavez, YARTS Transit Manager. “This award directly enables YARTS to maintain its foundational goal of easing congestion in Yosemite National Park. The new coaches will be equipped with the latest technology, making them cleaner and more comfortable buses to ride than buses on the road today, which means we are also helping to improve our region’s air quality overall.”

There was stiff competition to acquire the funds from across the country. Only 14 projects were awarded federal dollars, with YARTS being one of two projects awarded on behalf of the California Department of Transportation (Caltrans). For the entire list of FTA award recipients, click here and here for YARTS scheduling information.