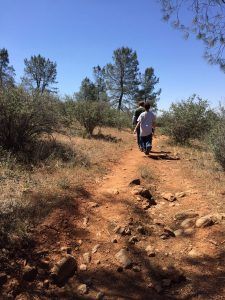 It took almost 10 years of living in the Sierra Foothills to learn to appreciate the unique appeal of the flat, sparse, dry landscape below Sonora and Jamestown. I was always a mountain girl at heart; the more cedar, pine and fir trees hugging the house, the better. But then, the stunning palette of delicate spring wildflowers in the austere lower elevations won me over and, in time, so did the prickly beauty of the whole landscape.

One of the best places to experience this terrain is the Red Hills Management Area, a 7,100-acre parcel near Chinese Camp, set aside as an “Area of Critical Concern” by the federal government due to the unique flora and fauna native to the area.

It is a harsh environment in which to survive, in large part due to the rocks that form the soil: dunite and serpentine (California’s state rock). According to the Bureau of Land Management (BLM), which oversees the area, the Red Hills area “contains one of the largest exposures of serpentine rocks in the Sierra Nevada.”

Most serpentine (or, serpentinite) landscapes have high levels of magnesium, which causes calcium deficiencies. The Red Hills soil is also high in other heavy metals, including iron, which contributes to its reddish color, and very low in the basic nutrients most plants need, such as nitrogen, potassium and phosphorus. Combine low soil fertility with drought and brutal heat, and you get an environment that supports only the toughest native plants.

Among the Red Hills stalwarts are five rare plants considered “sensitive” by the BLM. California verbena, which grows to about 18 inches tall and sports pale to dark purple flower clusters, is found nowhere else in the world. This verbena is confined to the short stream reaches in the Red Hills where there is seepage from groundwater year-round.

The Rawhide Hill onion is another rare plant that occurs in small colonies throughout the Red Hills. Typically blooming from April to May, this Red Hills native produces 20 to 60 small, white or pink flowers and prefers south-facing slopes with shallow soils. Both the California verbena and Rawhide Hill onion have been proposed for listing under the Endangered Species Act.

The three other relatively rare plants are the yellow-flowering Layne’s butterweed, a member of the sunflower family; the perennial herb Mariposa desertparsley; and the Red Hills soaproot, a wavy-leaved ground hugger that has white flowers from May to June — but opens its blooms only at night.

Other bushes you might see include Toyon, coffee berry, hollyleaf redberry, and manzanitas. Native perennials like California oniongrass, big squirreltail and pine bluegrass make up a large percentage of the grass cover in the Red Hills. Virtually the only tree that lives here is the foothill pine.

In mid-March, I visited the Red Hills. The California buckbrush were in full bloom, great swaths of goldfields wildflower covered hills and roadsides, and the first poppies and purple lupine dotted the landscape. I saw a few of the rare California verbena.

In addition to its unique beauty, the Red Hills area offers local gardeners a valuable lesson: As we continue to endure a severe drought, it behooves us to rely on the plants that have proven to be star survivors in the foothills.

To tour the Red Hills area soon, consider an April 13 field trip hosted by the Sierra Foothills Chapter of the California Native Plant Society. Contact Lyn for more information: billielr@sti.net or 209-966-5316. Or for general information about the Red Hills, visit http://www.blm.gov/ca/st/en/fo/folsom/redhills/redhillshomepg1.html.

Rachel Oppedahl is a University of California Cooperative Extension Master Gardener of Tuolumne County, who doesn’t see the lowlands as “barren” anymore.