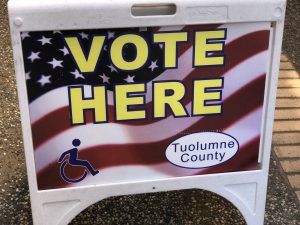 Sonora, CA — Prospective candidates for the June Primary election have until the middle of next month to file papers to run for city, county, state and federal races.

In the Sonora City Council race, the seats currently held by Colette Such and Jim Garaventa will be on the ballot. They have not yet taken out election papers, but two other prospective candidates have, Suzanne Cruz, a local business consultant, and Darren Duez, a business owner.

In Tuolumne County government, all of the incumbents have now qualified for the ballot in the races for Supervisor District Two (Ryan Campbell), Supervisor District Three (Anaiah Kirk), Superintendent of Schools (Cathy Parker), Assessor/Recorder (Kaenan Whitman), District Attorney (Cassandra Jenecke), Sheriff (Bill Pooley) and Tax Collector (Justin Birtwhistle). No challengers have emerged to this point for any of those races.

Also, no one has filed papers for the County Clerk/Auditor-Controller position currently held by Debi Bautista.

There is a separate later filing period for school boards and special district races, like TUD, for the November General Election ballot.