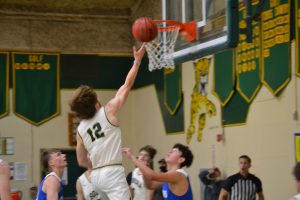 Callahan Hanson up on the rim - Photo by Dyan DeOliveira Foust.

The Wildcats got off to a sluggish start before senior Elijah Yee knocked down back-to-back three pointers in the middle of the first quarter. From there the Cats were off and running, knocking down a season high 15 shots from behind the arc on their way to shooting a blistering 47 percent from deep.

Leading scorer Callahan Hanson started slowly, missing his first four shots before catching fire and making his last eight on the way to matching his season average of 19 points. Yee finished the night with 14 points, four assists and three steals, while Roger Alderman chipped in 10 points and seven rebounds. It was a feel-good win for the Cats as eight different players knocked down at least one three ball. The last by senior Kade Clifton, his first of the year, sent the student section into a frenzy.

With the win, Sonora pushed its record to 26-3. The Wildcats will now host a second round game against fifth seeded Union Mine Monday at 7:00 p.m. Union Mine, 22-7, has hovered near the top of the Sac-Joaquin Division 4 rankings all season long. Tickets for all CIF playoff games must be purchased online at https://gofan.co/app/school/CA22609