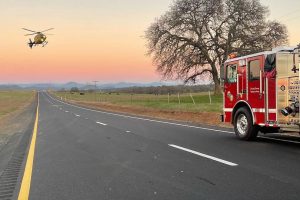 Update at 6:15 p.m.:  The CHP reports that a rollover crash on Highway 108/120 that was blocking the far eastbound lanes near the Rushing Hill Lookout Road intersection has been cleared and the roadway has reopened. Further details on the collision are below.

Original post at 5:45 p.m.: Tuolumne County, CA — A solo-vehicle crash on Highway 108/120 near Knights Ferry and the Tuolumne County line is stalling traffic during the evening commute.

The collision happened around 4:45 p.m. near the Rushing Hill Lookout Road intersection on the eastbound lanes. The CHP reports that the far lane is blocked and officers are directing traffic. Emergency responders found the vehicle on its roof with one person trapped inside. That person has since been freed from the wreckage and is suffering serious injuries. Additionally, an air ambulance has been called to the scene. The CHP says it hopes to have the wreckage cleared in the 6 o’clock hour.