Rim Fire: A Story of Recovery 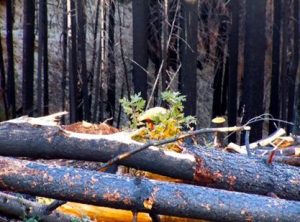 On a recent tour of the Rim Fire area, it was heartening to see green growth, particularly in acreage that burned with high intensity. This is a sign that recovery has begun. However, when an area experiences a severe fire, the regeneration process is not a single event, but occurs in stages, where different plant communities succeed as the physical environment changes over time. The rate at which areas of the Rim Fire recover will vary due to differences in topography, elevation and the intensity at which it burned.

Following a severe fire, the accumulation of burned organic material releases nutrients into the soil. There is little competition for these now that the landscape has burned. Other resources, such as water and sun, can now reach new growth. The first plants to populate these barren landscapes are herbaceous and shrub species that thrive in exposed conditions, as well as sun-loving trees that resprout or have survived the fire. This initial stage of early growth is characterized as one rich in biodiversity, as many plant species now have access to the resources they need and, in turn, attract a variety of animal species to the area.

You can see this early growth today in the high and medium intensity burn areas of the Rim Fire. These areas are being transformed by explosive populations of lupine, yerba santa, Ceanothus, fern, soap root, Brodiaea, mountain misery, milkweed, willow, manzanita, rabbitbrush and many others. A number of plants currently growing in these areas hadn’t been seen in years, since the pre-fire conditions inhibited their existence. Hardwood trees such as black oak and dogwood are resprouting and thriving with the absence of a canopy cover. The resprouting of these trees gives them an adaptive edge over conifers during this early growth stage as conifers need to start from seed.

The next stage of plant recovery (in a mixed conifer forest) occurs when the hardwood and conifer trees grow tall enough to form a canopy. Typically, the forest, at this stage, has two distinct layers: the upper canopy of trees, and the shaded understory, which favors shade-tolerant plants, and excludes those that prefer exposed conditions. There is a higher mortality of shade-intolerant tree seedlings such as hardwoods, ponderosa pines and sugar pines. Instead, shade-tolerant seedlings such as Douglas fir, incense cedar and white fir begin to form high-density stands. This stage is characterized by a decline in the number of species.

Over time, there are adjustments to the dense stands of trees in the forest that lead to the next stage of succession. Gaps form in the canopy when clumps of trees die out (from fast-moving fires, insect invasion, resource competition etc.) and these gaps are filled with new trees and understory development, in much in the same way the landscape changed following the initial disturbance of fire: sun-loving species experience a boon and then die out as more growth occurs within these gaps. The low-intensity burn areas of the Rim Fire have retained most of their canopy cover and are at this stage of recovery.

In very old, mature forests, nutrients are released into the ground from dead, decaying material allowing for increased growth in the lower and middle stories of the forest. Biodiversity once again increases and year-to-year changes in forest composition are minimal. This is the final stage of recovery in a mixed coniferous forest, but this stage rarely occurs in logged woodlands and areas that experience frequent disturbances.

The National Forest Service (NSF) has adopted various management strategies to aid in the restoration of the Rim Fire burn area. These include protecting the heat-ravaged soils from erosion, reforesting portions of the forest with conifer seedlings to compensate for the decimated seed bank in the burned soils. Also, clearing brush and weeds from around the seedlings for up to five years to remove resource competitors will ensure a higher survival rate for the new conifers, and will reduce the high fuel load created by masses of dead trees in the worst burned areas. In this way, they hope to promote a healthier, more resilient forest capable of handling moderate disturbances.