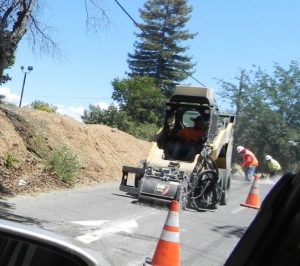 Sonora, CA – A high-speed fiber-optic cable has been installed and has been tested with success along its loop from Calaveras to Tuolumne County.

It took two years of construction work, along nearly 35 miles of roadways in those counties to complete the Central Valley Independent Next (CVIN) Broadband infrastructure project in this region.

Deputy Director of Tuolumne County Roads Duke York says, “They are still connecting some of the side projects that are off the main line and they will probably be doing that for another month and a half.”

York says that in Tuolumne County there are 5 1/2 miles of line in Sonora, 19 stretching county maintained roads, 7 along Caltrans highways and several more miles on other roadways.  Initially, the line will serve business and government entities, according to York.  “It will allow for a much higher speed internet, which is something that from a business stand point is very desirable in Tuolumne County.  We are looking for that to stimulate our local economy,” says York.

The plan is to offer the high-speed internet to residents as well, but York says, that service will not be available for a while.

The total CVIN project covers 18-counties in the state and is funded by the federal stimulus package in 2009.