What To Do With Autumn Leaves 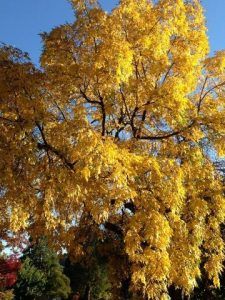 Now is the time of year when leaves begin to fall. In fact, in many places, the drought has caused leaves and pine needles to dry and drop early. The leaves which fall to the ground, along with twigs, bark and numerous other organisms, form a layer on the soil that is very active biologically, and is slowly broken down and decomposed.

This same organic layer is involved in a process known as nutrient cycling. Nutrient cycling is especially important in natural environments, which is what our area was before development took place.

As plants grow, their roots absorb nutrient materials from the soil. The plants use these nutrients to produce wood, bark, roots and leaves. As seasons pass, some plant parts die and are returned to the soil surface where they gradually decompose and their nutrients are released into the living plants.

This organic layer is extremely conducive to plant growth because it is well aerated and high in nutrients. Plant materials contain high levels of nitrogen. When fallen plant materials are broken down by fungi and other microorganisms, the nitrogen can be used by new plants for growth.

Ground which has had the organic layer removed suffers from nutritional losses and becomes more susceptible to erosion from wind and, especially, water. Water erosion is a serious concern in areas such as ours where much of the ground is on slopes The organic layer, if left on:

1) Helps keep surface temperatures lower than they would be on bare soil.

2) Helps conserve ground moisture. (A layer of leaf mulch can reduce your outdoor water needs by half.)

3) Acts as a mulch to suppress weed growth.

In addition to leaving the leaves to break down into a nutrient layer on the ground, leaves can be composted to break down faster. Composting is simple, compost “happens.” However, a little manipulation will accelerate the process, giving you a valuable soil amendment in as little as two weeks.

Leaves can be chopped—smaller pieces break down faster. Layer them in a pile, a wire cylinder, or constructed compost bin – with green kitchen scraps, lawn clippings, and old garden plants, in roughly equal volumes of “green,” nitrogen-containing materials (kitchen scraps and grass clippings) and “brown,” carbon-containing materials (dead leaves). Don’t stress over whether the ratio is correct, or whether you have enough “browns” or “greens.” Composting happens naturally.

Turning compost will accelerate its decomposition. A compost pile turned every day will be ready for garden use in about two weeks. Once again though, don’t stress over turning the compost pile. Even if left completely undisturbed—as on a wilderness forest floor—eventually your leaves will become compost, revitalizing the soil from which they came.

Be sure to add moisture to your leaf compost. Too little water, especially on dry leaves, will prevent decomposition. Too much water fills up the air spaces, depriving aerobic microorganisms of oxygen, and causing the compost pile to form ammonia and methane—which smell bad! When you touch the compost, it should feel slightly damp, similar to the amount of moisture remaining in a squeezed-out sponge.

Many people participate in yard slash reduction or “fire-safe” landscaping in order to reduce the danger of fire. You may have dropped off your material at a local slash site. Much of this material was chipped and sold to local biomass power generators to create electricity. However, next time consider whether this material can be used as mulch or compost to feed the soil in your yard and garden.

Contributor Bill Seldon is Public Works Supervisor for the City of Sonora.