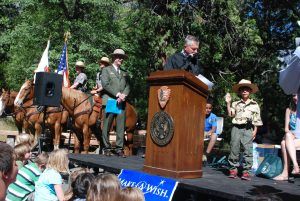 Gabriel Lawan-Ying from Gainesville, Florida sought to be a Yosemite Park Ranger, and he achieved the title after a full day of work this week. As part of the Make-A-Wish Foundation program, Gabriel performed a variety of duties of a Park Ranger.

The youngster worked with a crew to help put out a wildland fire, worked on a rescue operation involving an injured hiker, and went on a walking tour through Cook’s Meadow. At the end of the day he was made an Honorary Ranger at a ceremony attended by approximately 300 people. It included Park Superintendent Don Neubacher, a local Magistrate Judge, several Park Rangers, community members and family.

Gabriel received a badge, credentials, plaque and the flag flown over Yosemite Valley yesterday. Yosemite could not go into details regarding Gabriel’s background, other than to note that he has a condition that is considered life-threatening.