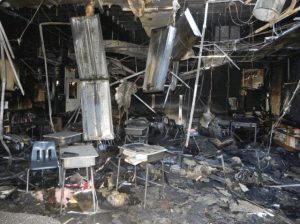 Sonora, CA — Hearings have determined the 17-year-old arrested for the Sonora Elementary School fire will be tried as an adult.  The Tuolumne County District Attorney’s Office released this statement:

“Today the Tuolumne County District Attorney’s Office filed criminal charges against Shahaun Lemont Davis in connection with the fire which severely damaged Sonora Elementary School in November of 2013. Following a series of hearings, Davis, born on August 7, 1996, was found to be an unfit subject to be dealt with under juvenile law. Davis, who will be tried as an adult, is charged with burglary and arson of a structure with a special enhancement alleging damage in excess of one million dollars. Davis is scheduled to be arraigned on April 8, 2014 at 1:30 p.m. in Department 2 of the Tuolumne County Superior Court and remains in custody in a juvenile facility until further order of court.”