Wildcats Lose a Close One to Top Ranked Escalon 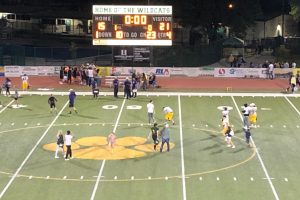 Sonora Wildcats at home against the Escalon Cougars

The Sonora Wildcats lost a close game to the Escalon Cougars last night by the score of 21-15.  Escalon came into the game as the top-ranked team in the San Joaquin section VI.

Sonora started the game well on defense, shutting down the high-powered Escalon offense with a series of 3rd down stops that were unfortunately negated by two face mask penalties and a pass interference.  Escalon capitalized on the penalties and went up 7-0 on a drive that chewed up 7:44 of game time.  Despite a couple of long plays on the ensuing drive, the Wildcats stalled at midfield and were stopped on a 4th down conversion attempt as time expired in the first quarter.  The teams traded drives and 4th down stops in the 2nd quarter and went into the half with the score still 7-0 in favor of the visiting Cougars.

The Wildcats received the 2nd half kickoff and despite a 40-yard run from senior Erin Greenway were eventually forced to punt at midfield.  A couple of runs by Escalon star running back Logan Anderson including a 28-yard dash put Escalon deep in Sonora territory.  A 9-yard TD pass from quarterback Donovan Rozevink to tight end EJ Lewis completed the drive and put Escalon up 14-0.  The next Sonora drive stalled early, and Escalon was able to capitalize quickly with a long pass to WR Tyler Medina, followed up on the next play with a short TD reception to Medina that extended the Escalon lead to 21-0.

Facing a three-score deficit the Sonora offense came alive.  QB Bradley Curnow lobbed a deep ball to WR Chance Pimentel who made a spectacular juggling catch for a 22-yard reception.  A few plays later, Cade Clifton took another Curnow pass and turned a spin move off an Escalon defender into an 8-yard touchdown with 6:00 left in the game.  The Sonora defense held strong on the following drive, culminating with a 4th down strip-sack that gave the Wildcats the ball at their own 35-yard line with 2:28 to play.  After a series of short passes, Greenway took over.  The next 3 plays were all runs to Greenway for 22 yards, 12 yards, a 15-yard personal foul by Escalon, and a 1-yard dive for the touchdown.  After an offsides by Escalon put the ball at the 1 1/2-yard line, Sonora punched it in for a 2-point conversion to bring the score to 21-15 with 0:51 left to play.  Despite a bouncing loose ball on the onside kick, Sonora was unable to recover, and Escalon ran out the clock to seal the win.

Sonora falls to 1-2 and travels next week to play the Hilmar Yellowjackets.  All the action can be heard live on Star 92.7 beginning at 7 p.m. Erin Greenway earned Chicken Ranch Casino Player of the Game honors for his performance on both offense and defense, anchoring the Wildcat linebacker corps.

The Summerville High game against Waterford was canceled due to a spike in COVID-19 cases that has shut the campus down until Tuesday, Sept. 7th, as earlier reported here. The team will play on their home turf against Hughson next Friday, Sept. 10th with the game aired live on KKBN 93.5 beginning at 7 p.m.