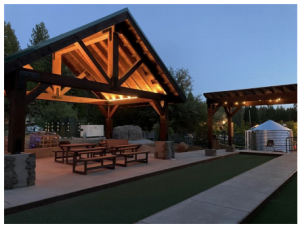 Twain Harte, CA — A dedication ceremony will be held later today following the construction of a notable project to improve the bocce courts in Twain Harte.

The Twain Harte Community Services District added a new rustic-style pavilion, shade pergolas on both ends, and a rain tank to catch precipitation off the roof that will be used to water the landscaping and community garden.

General Manager Tom Trott states, “This is the first phase of what will be the larger Twain Harte Meadows Park, and it serves as a preview of what is to come with the bigger park.”

More information about the Twain Harte Meadows Park plan can be found here.

The Twain Harte Community Services District received money for the bocce court improvements from the Sonora Area Foundation, a state water conservation grant, and generous donations from local community members and businesses. The project will be dedicated to the late Jim Johnson, who served on the boards of THCSD, the Twain Harte Homeowners and the Sonora Area Foundation. Click here to read an article about his 2019 passing.

The dedication will be this evening at 6:30pm. Initially, there was a plan to serve refreshments afterward, however, THCSD says that has been eliminated due to recent updated guidance from public health in response to increasing COVID-19 cases. The district is asking those in attendance to social distance as much as possible. The court is located at 22945 Meadow View Drive.