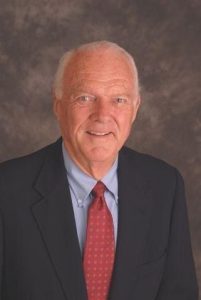 Sonora, CA — A well-known and respected pillar of the Twain Harte community has passed away at the age of 84.

Jim Johnson was born and raised in the Bay Area community of Hayward, but his family became involved in the Twain Harte community in the early 1940’s upon purchasing a family cabin. His bio as a representative of the Twain Harte Community Services District notes that he met his wife Patricia while working as a lifeguard at the Twain Harte Lake. Following Jim’s retirement in 1999, from a 40-year career in the field of medical intravenous solutions, and rising to the position of company Vice President, the couple relocated to Twain Harte full-time.

He became one of the most well-known and influential leaders in the community, serving as board president/chairman for various community service organizations, including the Twain Harte Community Services District, Sonora Area Foundation, Twain Harte Homeowners, Twain Harte Lake Association, Partners for Twain Harte and the Twain Harte SIRS (Sons in Retirement).

In his spare time he enjoyed hiking, traveling, reading and volunteering.

Johnson passed away Tuesday at the Stanford Medical Center. He is survived by his wife Patricia, daughter Janet Lee Davies, and three grandchildren.

Per Johnson’s request, no funeral services are planned. The Heuton Memorial Chapel is overseeing the arrangements.