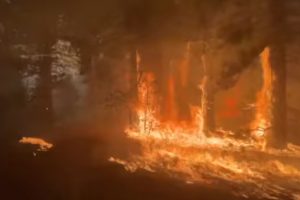 Sonora, CA – The video in the image box was taken near Lake Almanor where the Dixie Fire is burning in Butte and Plumas counties. It is now the single largest fire in California history and the largest active blaze in the U.S.

Several local units are working on that fire, which as of this morning is 446,732 acres and continues to be 21% contained. The Calaveras Consolidated Fire Protection District is reporting that twelve of its members have been assigned to three separate blazes throughout the state.

Working the Dixie Fire is OES 4308. It makes up a Strike Team that is a mixture of firefighters from Tracy, West Sacramento, Manteca-Lathrop, and Amador County. This particular team has been out on assignment for over a month.

Engine 133 is helping to battle the River Fire near Colfax. It is 26.000 acres and 46% contained. Also, five “overhead personnel” are assigned to the Monument Fire in the Lassen Trinity Forest that has charred over 42,000 acres with zero containment. It was started by lightning on July 30th. Those members are part of USFS Incident Management Team 5.

In regard to fire coverage back home, CCFPD officials state, “Rest assured that our fire stations are fully staffed.”

As reported here last week, Engine 733 from the Tuolumne Fire District is also assisting in battling the Dixie Fire.