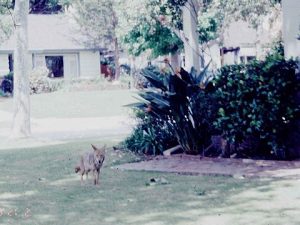 Coyotes have a bad reputation. They prey on our treasured pets, get into garbage and pet food, and attack livestock. Farmers are especially on the rampage against these beasts. But coyotes play an important part in the ecosystem. They regulate the number of skunks, foxes, and raccoons in the environment. Without coyotes, the number of small animals and rodents increases rapidly. When small predators increase, the number of diverse species of birds decreases. The only animal that preys on the coyote is a wolf. And humans! We, humans, have encroached upon their territory with suburban sprawl and rural farming.

Normally, coyotes are elusive and avoid contact with humans. But as urban and suburban cities and towns increase in size, the coyote is more present and can pose problems for cats, dogs, and livestock, even small children. When coyotes grow inured to humans, they can become bold and even aggressive.

Even though the news reports often have negative stories regarding conflicts between coyotes and people, the average is about 1 to 5 encounters per year per state where a person becomes injured or bitten as a result of contact with a coyote, and often as a result of feeding it. There are roughly 4 million dog bites nationwide every year, so it is more likely that we would be injured by our dogs than be attacked by a wild animal.

Coyotes are most active after dark and before dawn. They occupy large home ranges, in some cases up to 40 square miles. Besides rodents and skunks, coyotes eat insects (mostly grasshoppers), fruits, berries, and carrion. They even attack and kill full-grown deer and other large prey.

There are a number of ways to discourage coyotes in your garden or around your home:

Hazing is a method of scaring off coyotes. Hazing involves banging pans together or making loud noises and shouting. If you have a coat on, open it up to make yourself appear larger. If the animal goes a little way away and turns to look at you, continue scaring it with noise until it really runs off.

Traps and poisons to kill coyotes are illegal in California. Shooting is not illegal although shooting is not safe or legal in many situations, especially in suburban areas. State wildlife laws prohibit the relocation of coyotes because they are a rabies-vector species (although rabies in coyotes is rare).  Also, in most cases, relocating a coyote is a death sentence for that animal. Coyotes are very territorial. After being relocated, they will do just about anything to get back home and will undoubtedly face many challenges along the way. Unfamiliar with their new terrain, they are often killed while crossing roads and highways. They may also be injured or killed during territorial disputes with coyotes already established in the area where they’re released.

So, eradication is not the answer. We just need to learn how to live with them and minimize the temptations that attract them.