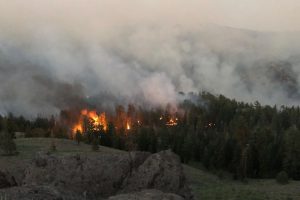 The acreage has jumped from 650 to 919 and the containment from 18% to 21% in the lightning strike Henry Fire that broke out at the end of June. It is burning near Spicer Reservoir on the Calaveras Ranger District in the Carson-Iceberg Wilderness in the Stanislaus National Forest. Forest fire officials update that the flames were a little more active due to interior burning, the completion of burnout operations, and a northeastern spot fire.

Crews are “actively containing spot fires “and have completed burnout operations to support maximizing the use of natural barriers. They added, “Nighttime cooling and slightly increased humidity will moderate fire activity somewhat this evening. Firing operations will continue as needed.”

One structure is threatened. Resources remaining on scene include 48 personnel, 4 hand crews, and 2 helicopters.

The River Fire burning in Mariposa and Madera counties is holding at 9,500 acres and the containment rose to 36% from 21% yesterday. There remain five structures destroyed and 600 threatened.  While increased humidity helped firefighters overnight fire officials voiced this concern, “Years of drought and disease have weakened many trees, and those dead and downed trees and logs continue to pose problems along steep drainages.”