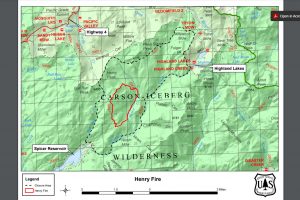 Dubbed the “Henry Fire,” it broke out last month during a lightning storm in the Carson-Iceberg Wilderness northeast of Spicer Reservoir and southwest of Highland Lakes at 7,500 ft. elevation. As reported here, Yosemite National Park is also working on 19 lightning strike fires.

Fire managers are utilizing a confine and contain strategy using ridges, creeks, trails, and natural barriers to suppress the fire. They add that the terrain is steep with brush, patches of conifer trees and granite outcroppings.

Regarding the current conditions fire officials relay that as weather and fuel conditions are favorable, crews will continue to conduct burning operations to strengthen containment lines. They explain that those operations remove vegetation between the edge of the fire and containment lines. Ground crews’ objectives are to maintain fire north of Hiram Meadow, south of Carson-Iceberg Wilderness boundary, east of trail 19E43, and west of trail 19E41. A fire closure was issued today for the Henry Fire area, click here to view the order and the trail closures.

Forest officials note that except for a 12-acre blaze last year near Henry Peak, the area has not seen a fire in over 20 years. They advise, “Reintroducing fire into fire-adapted ecosystems has several ecological benefits such as reducing hazardous fuels, promoting new plant growth, and improving watershed quality.”

Resources assigned to the fire include 50 personnel of four Hand crews and a Type 3 Incident Management Team.  Smoke may be more visible during the daylight hours and settle overnight in the canyons.