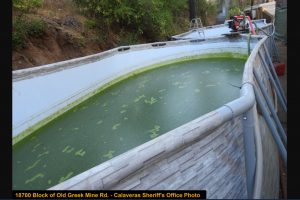 Algae pool at site of illegal grow in Mountain Ranch

Mountain Ranch, CA – A pool bright with green algae and a pump pictured in the image box was one way marijuana plants were being watered at one of three illegal grows in Calaveras County estimated worth $574000.

The grows targeted by the Calaveras County Sheriff’s Office Marijuana Enforcement Unit were all in Mountain Ranch. Two were on the same road within a block of each other while the other was one street over. The raids happened a week ago on Tuesday, June 22.

At the first site in the 18700 block of Old Greek Mine Road in Mountain Ranch, deputies seized 242 pot plants worth over $169,000, according to sheriff’s officials. A citation for illegal cultivation and sales was issued to the only person on the property, 46-year-old Jesse Yang of Stockton.

209 plants and over 6 pounds of processed marijuana were discovered at the second site located a block up (18800 Old Greek Mine Road), but no suspects. Investigators estimated this grow to be a combined value of more than $150,000.

The third site, just to the north in the 18300 block of Sequoia Road, involved the biggest seizure of the day. Deputies uncovered 247 growing marijuana plants and nearly 83 pounds of processed pot with an estimated $255,000 value. A firearm was also discovered at the scene. Matthew Lee Linneman, 43, of Mountain Ranch, was cited for operating an illegal grow and sales.